Blog | What is Hydraulic Conductivity?

What is Hydraulic Conductivity?

There needs to be a point of terminology first. In geotechnical language hydraulic conductivity is often referred to as coefficient of permeability, most commonly shortened to permeability. This can sometimes lead to confusion in terminology, as will be mentioned later.

In theoretical terms, hydraulic conductivity is a measure of how easily water can pass through soil or rock: high values indicate permeable material through which water can pass easily; low values indicate that the material is less permeable. Hydraulic conductivity is typically given the symbol k and has units of velocity, for example metres/sec or metres/day.

A key aspect of hydraulic conductivity is that a very wide range of values exist in natural soils and rocks, perhaps a range from 10-2 m/s (for very open gravels and cobbles) to 10-11 m/s (unfissured clays or massive unfractured rock). This is a huge range – a factor of a billion! This is a much greater range than would be expected for most other geotechnical parameters such as shear strength or compressibility.

It is also important to realise that the way that a fluid (such as water) passes through a soil or rock mass depends not only on the properties of the soil/rock but also on the properties of the permeating fluid. This means that a given soil or rock will behave differently if it is permeated by different fluids – for example water or hydrocarbons (oil). That is why using the term hydraulic conductivity is useful, because it is clear the term relates to the flow of water. The problem with the term ‘permeability’, widely used in geotechnical engineering, is that in other industries (such as the oil and gas industry) it is taken to mean the ‘intrinsic permeability’ which is independent of the permeating fluid – intrinsic permeability has the SI units of m2, although it is commonly described in Darcys (where 1 Darcy = 1 x 10-12 m2) – and is a significantly different parameter to hydraulic conductivity.

WHAT DOES HYDRAULIC CONDUCTIVITY MEAN?

Like many geotechnical parameters, hydraulic conductivity is simple in concept, but has some very complex aspects in practice, especially when trying to obtain realistic measurements or estimates of properties.

Mathematically, hydraulic conductivity is actually a coefficient in Darcy’s law, which relates water flow velocity to hydraulic gradient under laminar flow conditions. This is easy to understand for flow through an isotropic block of porous media as you might see in a text book, where hydraulic conductivity is the same at all points (uniform and homogeneous) and in all directions (isotropic).

Of course flow of water through soils or rocks is anything but homogeneous and is rarely isotropic.

In soils, the structure is made up of mineral particles in contact to form the soil skeleton, with a network of interconnected pores in the space between. 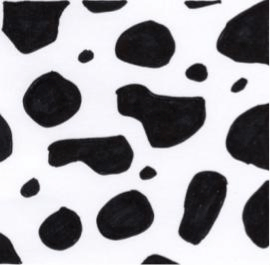 Water must take an often tortuous path along irregular pores between the particles. The use of Darcy’s law and the concept of hydraulic conductivity is justified by ‘zooming out’ and treating blocks of soil as being relatively homogeneous porous media, but it is important to realise that groundwater flow in soils can be very complex at small scale. Flow can be further complicated by soil structure or fabric such as layering, laminations or weathering.

The way that water flows through the pores of a soil mass is sometimes called ‘primary permeability’ or intergranular flow. In contrast, in most fractured rocks the principal way that groundwater flows is not through the spaces between the mineral particles forming the rock (the rock mass itself tends to have a very low hydraulic conductivity). Instead the water must pass along fissures, fractures or discontinuities within the rock mass. This type of flow is sometimes called ‘secondary permeability’ or fissure flow. 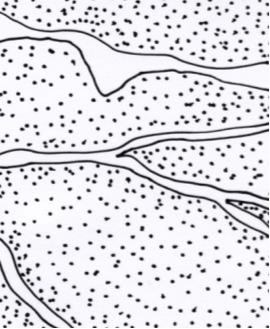 Idealised view of fissures or fractures in rock mass

Just like in soils the flow of water through rocks must often take a tortuous path along irregular fissures, and again the use of Darcy’s law and the concept of hydraulic conductivity is justified by ‘zooming out’ and treating blocks of soil as being equivalent porous media. However, it must be remembered groundwater flow in fractured rock can be very complex at small, medium and large scale, especially where fracture direction, frequency and opening width are controlled by rock structure and stresses or where the rocks are water soluble (such as chalk and limestones), where fissures may have become enlarged by millennia of natural groundwater flow.

WHY IS HYDRAULIC CONDUCTIVITY IMPORTANT TO ENGINEERS?

Hydraulic conductivity can present an interesting theoretical problem, but why should it be of concern to practising geotechnical engineers?

A less obvious answer is that because hydraulic conductivity controls the rate of drainage of soil or rock it has a significant impact on geotechnical stability problems (retaining walls, slopes, embankments, foundations).

The importance of hydraulic conductivity in geotechnical engineering problems is sometimes overlooked because it is often ‘wrapped up’ inside another parameter, such as coefficient of consolidation cv, which may combine rate of drainage (controlled by hydraulic conductivity) with other factors.

Obtaining realistic values of hydraulic conductivity is difficult, but is still worth doing, and should be a key part of geotechnical investigations.

Several different approaches can be taken to estimating hydraulic conductivity:

Methods of estimating hydraulic conductivity will be described in later blogs.