Excavations below groundwater level in Chalk can present particular challenges. In this blog, Dr Martin Preene of Preene Groundwater Consulting outlines some of the issues related to construction dewatering and groundwater control in Chalk. This is based on a recent paper by Preene and Roberts (2017) in ICE Proceedings, Geotechnical Engineering.

Chalk is a relatively soft fissured Cretaceous limestone rock that underlies many areas of the UK and north-western Europe. Excavation and tunnelling in Chalk must deal with potential groundwater inflows.

Chalk is a very diverse material and presents a wide range of groundwater problems. Highly weathered structureless Chalk often acts like fine grained or coarse grained geotechnical soils and can suffer from ‘running’ conditions or ‘blows’ where uncontrolled groundwater pressures destabilise the base and sides of an excavation. Less weathered structured Chalk can act like massive fissured rocks. In structured Chalk groundwater inflow typically occurs only along pre-existing bedding planes, fissures or other geological features, and can vary from minor nuisance seepages to major inflows with associated risks of instability and inundation.

Over the last three decades there has been extensive construction dewatering activity in the Chalk, associated with major tunnelling and construction projects such as the Jubilee Line Extension, Channel Tunnel Rail Link (now known as HS1) and Crossrail (Elizabeth Line), among others. These projects have greatly increased the expertise and experience of controlling groundwater for engineering projects in Chalk.

Hydrogeology of the Chalk Relevant to Construction Dewatering

The Chalk is an important aquifer in the UK, widely exploited for water supply. However, much of the hydrogeological literature for Chalk relates to groundwater resource issues, the design of water supply wells and the migration of contamination. The hydrogeological factors affecting construction dewatering are subtly different to those addressed in typical water resource projects.

Chalk is present beneath several areas of the UK. The Chalk of England is classified into three provinces, each with different lithological properties.

Chalk in thhe Northern Province, as found in Yorkshire, is often harder than its southern counterpart, and is covered in many areas by Quaternary Deposits (such as Glacial Till).

The Southern Province is part of the Anglo-Paris Basin and includes central London and the Thames Valley. In this province the Chalk is overlain in some areas by Palaeogene deposits (e.g. the Thanet Sand Formation and Lambeth Group in London) or by Quaternary deposits (e.g. River Terrace Deposits in east London or the Thames Valley upstream of London). In the Wealden district it has been eroded to expose older rocks in the Weald anticline.

The Transitional Province including the Chilterns and East Anglia in which some characteristics of both the Northern and Southern Province exist in different areas. Here the Chalk is often overlain by Palaeogene or Quaternary deposits.

The flow of groundwater in the Chalk is dominated by flow through fissures or other discontinuities, rather than by water percolating in a diffuse manner through the matrix of the rock. The matrix porosity ranges from 0.1 to 0.5 and is commonly of the order of 0.35. The pores in the matrix of the rock contain significant quantities of water, but are of sufficiently small size that the matrix has a very low permeability. The matrix water is almost immobile under the pumping action of construction dewatering systems or water supply wells. For practical purposes, the mobile water in the Chalk is restricted to permeable fissures that are typically associated with the structure of the Chalk and can comprise bedding layers, flint bands (particularly sheet flints), and networks of steeply dipping joints. Chalk, being a limestone, has a significant solubility to water, and fissures can become enlarged as a result of long-term groundwater flow, potentially resulting in the development of zones of enhanced permeability and karst flow systems. The distribution of permeable zones is further complicated by the presence of weathered zones within the Chalk, where the bedding and jointing has been disrupted.

For most construction projects in the UK, the nature of the Chalk encountered is described against a framework of different grades of Chalk – commonly known as the CIRIA grades, after CIRIA Report C574 Engineering in Chalk (Lord et al, 2002).

Construction Dewatering Methods for Use in Chalk

The table below (from Preene and Roberts, 2017) presents guidance on dewatering methods to be used in different grades of Chalk. 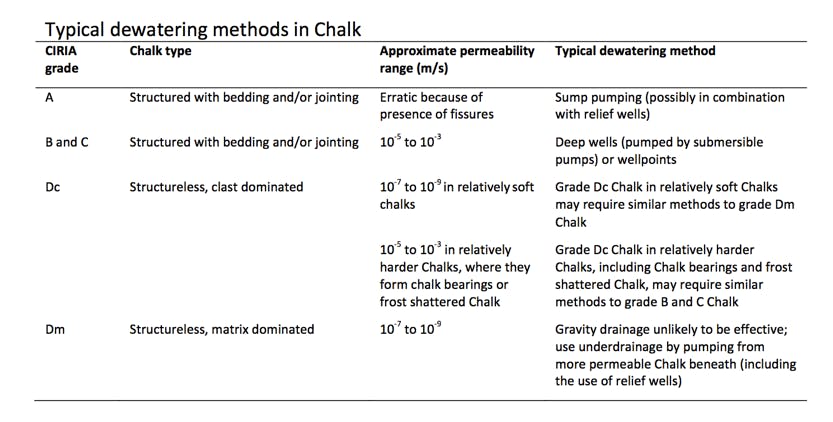 Use of Cut-off Walls and Low Permeability Barriers

Ground treatment by fissure grouting has proved effective in controlling groundwater flows in structured Chalk particular for tunnels and headings. Grouting in structureless Chalk is unlikely to be effective in these typically shallow, weak and more soil-like deposits. In these soils freeze walls generated by artificial ground freezing would be a more effective, although potentially costly, strategy.

This guidance should not be considered as a replacement for an appropriate hydrogeological investigation (and subsequent dewatering design) on sites where significant dewatering works are planned. In particular, a well pumping test or dewatering trial can be an important part of assessing the prevailing hydrogeological conditions that will affect a construction dewatering system in Chalk.